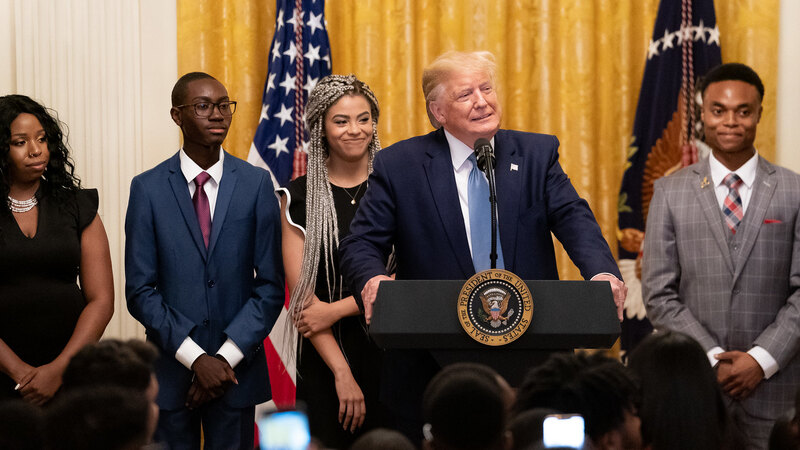 President Trump Delivers Remarks at the Young Black Leadership Summit by Official White House Photo by Tia Dufour is licensed under Public Domain
Last week the presidential campaign of Donald Trump announced a six-figure ad buy across black radio stations and in black newspapers. The newspaper campaign targeted 11 major markets in key states across the nation, including Pennsylvania, Michigan, and Virginia — all states that the Trump team believes will be in play in 2020. The radio ads were run in the same 11 urban markets. Under their theme of “Black Voices for Trump,” it is clear that the Trump campaign is emulating what the Franklin D. Roosevelt campaign did in 1936.

Just as Roosevelt overwhelmingly lost the black vote in 1932, doing worse than Al Smith in 1928, Trump lost the black vote in 2016. But, again like Roosevelt in 1932, Trump did reach out to the black electorate in 2016. Both FDR in ’32 and Trump in ’16 had some limited but encouraging success in winning over these voters: Roosevelt in New York where he had been governor, and Trump in Pennsylvania where his outreach helped provide his margin of victory in that key state.

The groundwork laid in 1932 was crucial to FDR’s success with black voters in 1936. In fact, in that first election, a wealthy oilman and key supporter of the Democrat, Frank Benedum, “saw the conversion of the black vote as a potential means of swinging Pennsylvania into the Roosevelt column,” Nancy J. Weiss wrote in “Farewell to the Party of Lincoln.” Benedum knew the key was longtime Republican supporter Robert L. Vann, editor of the Pittsburgh Courier, one of the biggest and most influential black newspapers in America. By 1932 Vann was fed up with the GOP. In his view, all the Republicans seemingly cared about was black votes, not the goals and aspirations of black Americans.

And now, on the verge of the 2020 election year, the political battle for the black vote is truly joined, with Donald Trump making an all-out effort to win over black voters who have misgivings about the Democrats similar to those their ancestors had about Republicans in 1936. They feel and say similar things, such as: “The Democrats just want our votes, not our babies. The Democrats don’t care about our children getting a good education, while they send their own children to private schools. They talk about helping us climb the economic ladder of success, but it is Donald Trump that has finally made begun to make that happen.”